Dandyism - Everything about men's dandy style. 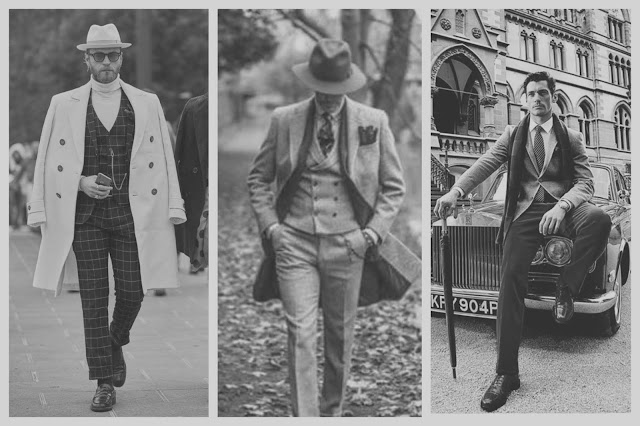 You often see new models are grabbing dandy's style now a days, they dress like dandies and they are following dandyism in fashion basically. So, the question is that, is it the modern style which is trending now? or it has any history. In this post you will get to know everything about dandyism and dandy style. Also, if you are fond of dandyism then in this article you will get to know how to dress like dandy's style in modern era.

There were lots of adjective and nouns you will found on any translator when you search for dandy meaning one web.
Like; Dandy meaning
Adjective
Fancy, beauteous, stylish, elegant, Fashion monger and my favourite tiptop etc.
Noun
Beau, dresser, swaggerer, dude etc.
But there are few, which will tell you the actual meaning of dandy.
Basically dandy is an ancient word which has rarely been used currently by our generation. Rather of using word 'dandy' we used word like stylish, dude, swaggerer etc. As I discussed above. In our new generation, there are various meanings of dandy's but it will used differently, depends on circumstances.

If we take dandy as a Fashion wear man then- 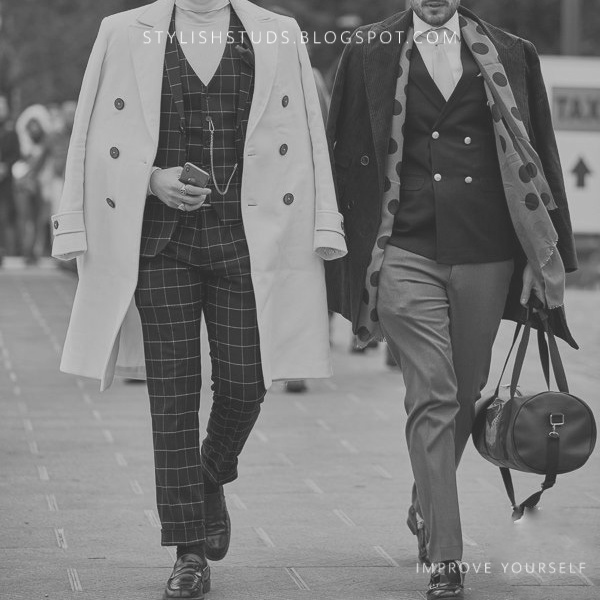 If we take dandy as a style-

It is a type of men's fashion wear or style of wearing an outfit, which a dandy used to wear on any particular place. Dandies are very conscious about their fashion. He knows better that how to wear a outfit. Dandy style basically is turned into a new type of outfit style that a dandy was used to wear, and which modern men's are following.

Dandyism is a type of fashion culture. Wearing dress like dandy's and following dandies these are the terms basically we can sum it up in one word 'dandyism'.
Dandyism not a new fashion style or men's wear which is trending nowadays, nor it is 20th century's word. 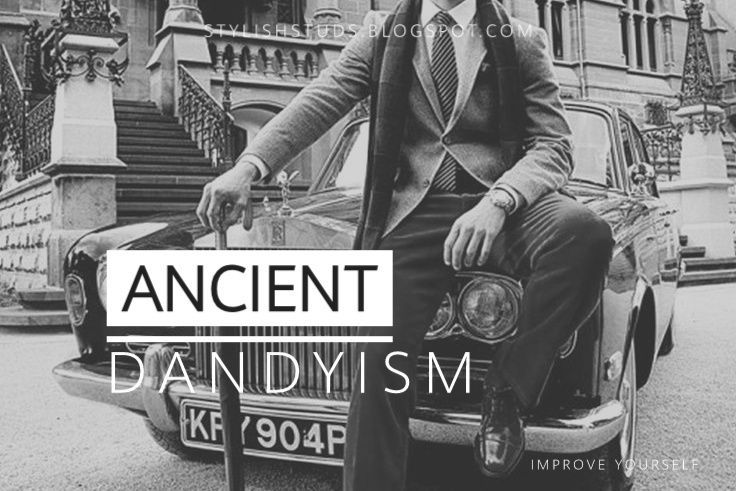 The first dandy model in Britain from British society was George Bryan brummell
Some of us know him as 'Beau Brummell'. He started dandyism in britain in 18th century. He was the man who loved to place his particular importance upon physique, appearance, leisurely hobby, defined language etc. Brummell was not from an aristocratic background; indeed, his greatness was "based on nothing at all," as J.A. Barbey d'Aurevilly observed in 1845. Never unpowdered or unperfumed, immaculately bathed and shaved, and dressed in a plain dark blue coat, he was always perfectly brushed, perfectly fitted, showing much perfectly starched linen, all freshly laundered, and composed with an elaborately knotted cravat. From the mid-1790s, Beau Brummell was the early incarnation of "the celebrity", a man chiefly famous for being  famous.
As like him there were different model who spread dandy style all over the world. After this at the end of the 19th century in America The man who used to follow dandy style and dandyism were called dudes. From that country the model named Evander Berry Wall were called as 'king of the dandyism'. After the invention of word 'dudes' we were started using this word and other similar words instead of dandy. But dandy is the actual word and dandy style is now again in trend.

A dandy style which is currently not in trend, you cand find some models which would following that African dandy style. New people are afraid of this style because it is something weird and exaggerated, that's why it is a dated fashion.
Basically it is a BAROQUE style in which extra color are their in outfits. A man generally afraid of wearing too many light colors in his outfit. In african dandy style it is the important characteristics that they have colourful outfits, which a man have to wear if he serves African dandy style. 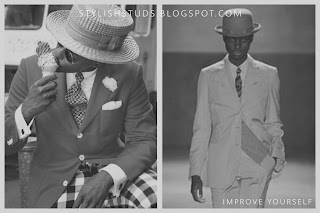 Normally a hat is a essential accessory for every flowers of dandyism. But in African dandy style they wear a completely different and exaggerated coloured hat. A colourful hat on head without any colour matching with outfit sounds terrible, but it is true the African Dandyism were never afraid to wear this type of hat.

You have seen many time before that a man or women is wearing colourful shoes like; sports shoes, sneakers etc. , but have you ever seen any guy who was wearing a colorful boots. We know only 2 or 3 colours of boots like;black, brown red-brown etc. and mostly we used to wear one of these color of boots. But in african dandy style they are not commonly used african dandies wears boots according to their outfit and as I say above they wears exaggerated outfit mostly, that's why they've to wear exaggerated boots also. They wear boots in various colours like; pink, dark red, green, blue etc.
On other hands they used various colours polish for their boots. 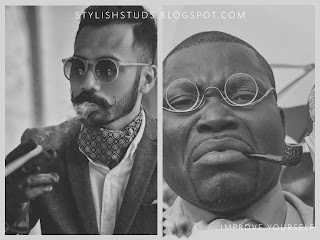 A men's suit is common in any official or formal wear abd similarly it is common for dandyism also. So, what is the difference in african dandy style suits? Answer is same again like shoes and hats, that it is also exaggerated according to color. The African dandies were used to wear different colours of men's blazer and contrasting color trousers. Like as; pink, light green, orange etc. These all colours sounds weird when it comes on a man, isn't it? It is but that's the fact which you can't refuse the african dandyism used to wear these types of men's blazer. 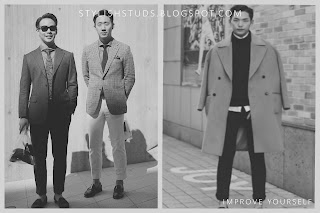 A dandy most often wears boot. Basically boots are essential featured wear for a dandy. But korean dandies are not more stucked on boot yet. They used to wear different types of shoes according to their outfit for a better combination. A korean dandyism are pro to wear something much than a boot in their footwear. They are improving their fashion along with time, and that's why they improved their footwears also. They used to wear different types of color shoes like; sneakers, loafers, high ankle etc. These types of shoes are trend of men's fashion and they all are used in Korean dandyism.

Decreased use of Hats 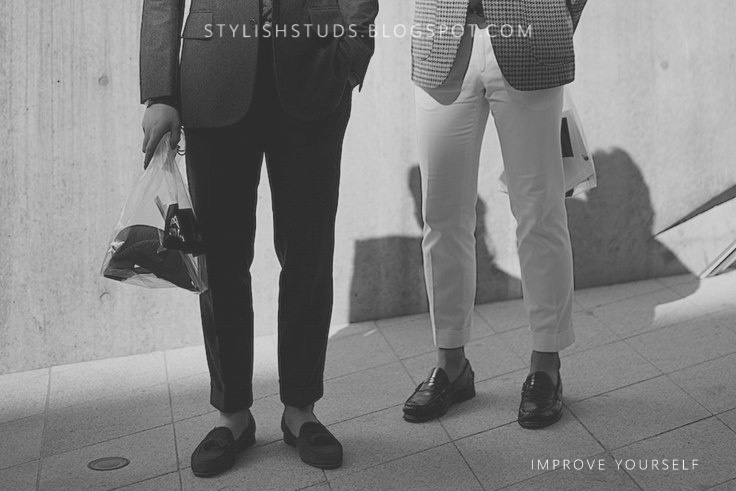 Chinos pants are used by every fashion conscious men when he hve to wear formals. But you know what's the best part of this, the best part of korean dandy style that thay started wear chinos type trousers with any type of upper wear. Korean dandyism are the first who started wearing chinos pants in such way. May be, chinos pants were originated from elsewhere but the spread of this fashion wear were started by korean dandies. They are tend to wear this type of pants in their dandyism fashion in casual style.

The old dandy style which I was talked out about above is unique and little bit fearful for new models. Because the old dandies are not afraid to wear those type of fashion wear which is we thought weird. That's why the old danyism are extinct. But not completely they are many Dandies are still their who have courage to follow those old type dandy style's rule.
Alon with extinct of old dandyism, yet there are new upgraded dandyism are created my new models. 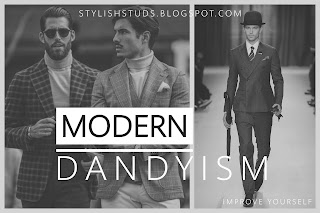 Yes, there are lots of new model who are following this damdy style like a fashion wear trends. The new fashion conscious men are wearing theor outfit similarly dandy style and uploading the pic of those outfits on their social media.
The new models wear dandies outfit in their own dandy style, which we called a modern dandy style. If we talk about a difference that takes place in modern dandy style from old is in their outfir color. The color which were ised by old dandies are exaggerated but in new dandy style their are few colors which are oftenly used in their outfits,or you can say thay they are dark colours like;black, grey, brown, maroon etc. 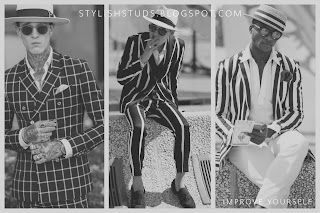 The dandyism wear are based on their types of blazerds. There are different types of blazers were used by dandies. The type of men's blazers which are used in modern dandy style is a check type blazer . The modern dandies loved to wear a check blazer in their outfit. They often wears dark colours suit like; black, brown, grey, maroon etc. Their blazer are well tailored and well-fit, according to their physique. 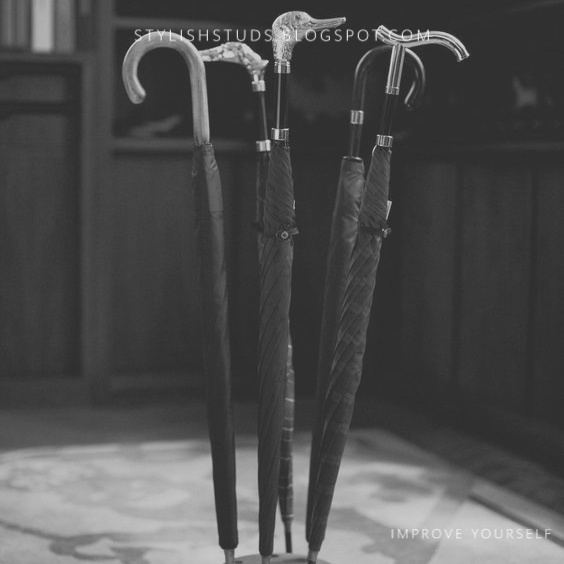 The modern dandies are often carry a umbrella or a stick whenever he dressed in dandy syle for a photoshoot. You also have seen that in modern dandy model's pic. Like old type dandyism the trend of that time was a cigar similarly the modern dandyism hand accessory trend is a stick or umbrella.
Why a model carry an umbrella or stick for a dandyism photography?
I don't know the exact answer of that question but what I thought that...
That give them a old type fashion culture look.
That it shows that the man is very conscious about their outfit that's why he carries an umbrella with him.
It is just a trend that everyone is following like other fashion trends.

A long dark color coat are also a featured wear of modern dandyism, you cam say that It is a replacement of check suit. A model also loves to wear that long type of coast instead of the check suit. A modern Dandies used to wear this fashio wear to show off their sense of style in fashion field. If we talk about colours, as I discussed above the dark colours long coat are mostly used by modern Dandies. 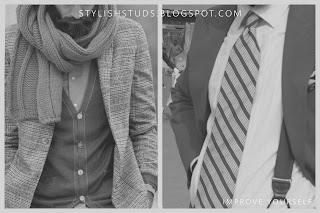 A scarf or you can call it muffler are used by modern dandies in winters. A muffler is often used as a winter protecting equipment by modern dandy. It gives them a mably look along with that it worked as a classy winter accessory.
In summers the dandyism fall in to a tie. Not only in summer but in any season it is used for giving a outfit a classy formal loom.  In every century of dandyism history the tie had been used as a featured accessory wear by Dandies. A dandy loved to wear suit or coat and tie give them both a stylish look.

The hat plays rolls in every type of dandy style with some differences. The uniqueness of modern hat is they are dark in colours some dandies used to wear a hat also in check pattern. If a model wears a long coat of modern dandy style then a hat is perfect for him. Pair of long coat and a hat increases a dandies style level.